Let's start off with one of the best pals I have, Elle.
We celebrated her 22nd birthday at a club, she was definitely feeling the night away.
A celebrant should not worry about anything, so we made sure that she had the greatest time of her life that night. We danced, we drank and got wasted. 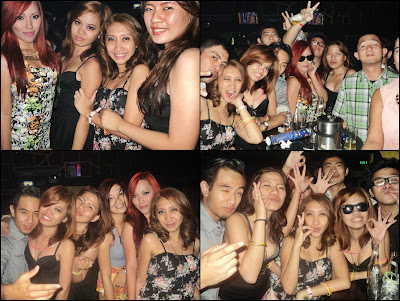 I did spend time with the fam, not just friends. I didn't take photos of it coz other fam member already did.

Being with my family and friends during the holidays is the best gift you can ever ask for, I mean asking for things is just a bonus you know, but spending time with them is even better. The moments you share with them is EPIC nothing can top that. So my friends and I decided to have dinner and drink at a bar, coz thanks to my Twinsie MsAirra we got a 3,000 worth of Gift Certificate to "The Draft" a European Pub.
So we ate, we chilled and we drank shots! :) 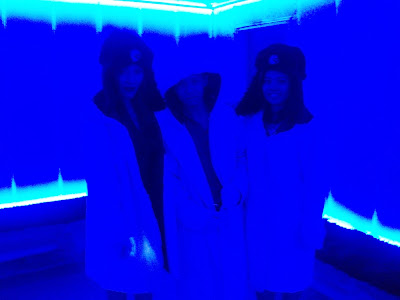 So the bar had this "Ice bar" thing, and it was fckn freezing! Airra and I are wearing like short dresses. So me and her are like POPSICLE STICKS inside a freezer.

and NOW! For my New Year celebration! :)

Since it was just Me, Dane and Airra who used the GC's we ended up having like 2,000 GC left, so we went back to Draft and invited some friends too. :)
It was Me, Airra, Dane, Shennen, Ren, Jason, and Jayson. lol
Oooooh and at the end of the night Jayson, lost his phone. hihihi (I know! I'm mean for laughing at him.) 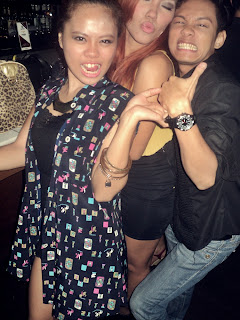 Last but not the least. Another New Year Celebration. :)

Dane and her friend invited us to go with them to Aracama, the place was great, very crowded and shots after shots. It was a great night to celebrate and start your YEAR :)
I was with Dane, Airra, Joseph, Jason.
Jason is Joseph's nephew. lol they're the same age.
We also saw Lovi Poe, a local celebrity here in the Philippines. <3 She looks amazing, very sexy!

So my friends and I went to Excess Superclub, we got invited by Jason (different Jason, it's weird knowing 3 people named Jason) and just partied all night, but Me, Airra and Elle ended up leaving the club and went to another one coz the crowd was fcked.

and FINALLY! I'm done.
This is pretty long. I should've just separated it, but I'm too lazy to do it. hihi

Thanks for reading my blog!! Have a great year everyone!
Posted by fashionjunkie024 at 7:54 AM 3 comments:

“I Can Be Body Beautiful at Any Age with Wacoal”

“How can you be body beautiful at any age with Wacoal?”

When I was still hooked on training bras I’ve seen my mom wearing pretty undergarments, I even tried them on, because I liked them that much, but now that I can wear a real pair of brassieres I definitely chose Wacoal. 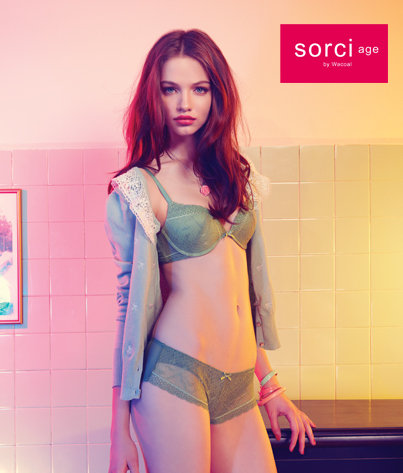 This New Arrival product of Wacoal is one of my faves! I’m addicted to the shade of gray, so right now this one is so perfect for my age and taste.


Twenty-year old women are exciting and more out-going, so a padded bra with a little embroidery can definitely support you and can make you look more remarkable with its design, plus points here is the panty, you can never go wrong with a laced type of undergarment. It’s very comfortable and the feel of the lace on your skin is just amazing.

Women can definitely TRUST Wacoal with its quality, their products are not just about designs that can make you look like a million bucks, but the comfort that it gives you is just noteworthy.

-          > If you haven’t tried Wacoal products the service is just great, you can’t just grab one and ask for your size, a sales lady will ask you first what your cup size is, then they will personally measure you so they can be sure of what your size is, after a few minutes they will give you the product that you need.

SO LADIES LET’S GRASP THE OPPORTUNITY TO BUY A WACOAL PRODUCT!
I KNOW I WILL!

THANKS FOR READING MY BLOG!

Posted by fashionjunkie024 at 3:23 PM No comments:

Greatest time of your life

Holy shiznit! I’ve been MIA in the world of blogging.
Sorry about that.

Anyway, I don’t really have much to say about myself, my life is SO BORING, it sucks, it’s annoying and it sucks twice, but this post is actually about a friend of mine, NOT ME, coz like I said my life is boring right now.

I do have a boring lifestyle too, I don’t always go out, and it only looks like it because of all the photos I take when I’m out, but the dates are so far apart. Though there are some things that have happened with me and my friends. J

I want to congratulate one of my very best-est friend LEA, she just got out of a 3 year relationship and it looks like she’s doing pretty well. One of the hardest things in life is, knowing that some a**hole broke your heart, dealing with something like this is pretty hard and us ladies gotta stand up for each other!
So Lea had a little help from us and gave her a bomb-ass make over! 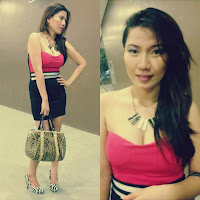 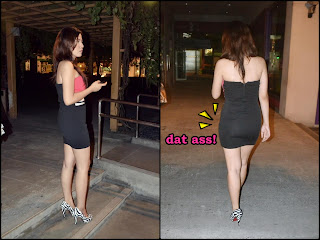 After a couple of weeks we took her out clubbing and let her meet and mingle with other people, it was a success, because the main goal is to have fun!

But the best of it all is having one of the greatest times of your life with your FRIENDS.
10++ of friendship baybbii! Lost count. lol 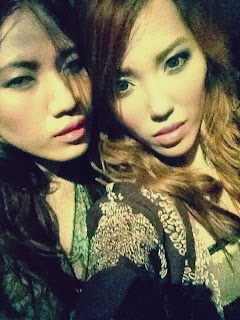 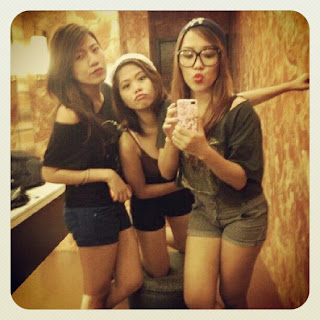 So remember ladies! Do not sulk and shut yourself out from other people, just focus on your life and your career don’t think about your love life, think about how you’re going to get back up on your feet. You’ll only make it harder on yourself, TRUST ME. I've been there.
Just be happy for the NEW YOU, coz that guy just lost the greatest girl he could ever find.

Thanks for reading my blog! <3

Hey what's up to all my Readers and to all Bloggers out there!

This will be short and brief...

Don't you just ever crave for foods out of the blue?? I'm pretty sure we all do right?

Story goes like this:
Earlier when I walked home, I was eating street foods and now at this time of night (10:31pm) I want to eat pancakes and pizza! Seriously, what is up with me and all this calories?
So...... Now I'm planning to leave early for tomorrow (I have a 10am class) so that I can go to Mickey D's (Mcdonald's) and eat PANCAKES and DRINK COFFEE.

Here are the street foods I ate earlier plus a Mickey D's Hot fudge sundae :)

Okay so the Shawarma looks butt-ugly, but believe it or not it taste good. If you haven't eaten a SHawarma before you should at least try one :) You can choose from Beef, Pork or Chicken and it has cucumber, tomato and onion slices in it plus a special sauce. I dare you to eat one coz it's really good.

As for my dessert... In a weird way after eating the mango and bagoong I saw a Mcdonald's and bought a hot fudge sundae.. Nyaha take that for a combination of dessert!

Oh and those aren't the actual photos of what I ate earlier, I couldn't take a photo earlier coz, "I was just walking, you know." Don't wanna get rob or something.

So that was it, I just wanted to share my day to you all.

Thank you to all my readers..
Glad to have visitors on my blog.. :)

So I wanna start by asking how's your weekend?? :)
Mine's pretty much dull, until today though..
I died and went to heaven!

Story goes like this:
I was just hanging out with my family earlier and my friend texted me saying "u free today? let's go to i'mshoeinlovebazaar." At first I was like dafuq?! but then again when I saw the word shoe I immediately replied sure be there in 2 hours.

We went to "I'm Shoe In Love Bazaar 2012" which was held at the NBC Tent at The Fort Strip and it was one of the most amazing scenes that happened in my life :) Haha I know over exaggerating but If you're a shoe lover YOU WILL DEFINITELY KNOW what I felt when I got inside. There were a lot and I mean A LOT of brands there especially for shoes! and seriously guys I died and went to heaven. I was going crazy for the 15% to 70% off sale for the shoes. Too bad I didn't have money coz of some financial stat that I'm having right now (boo!)

Anyway here are the brands: 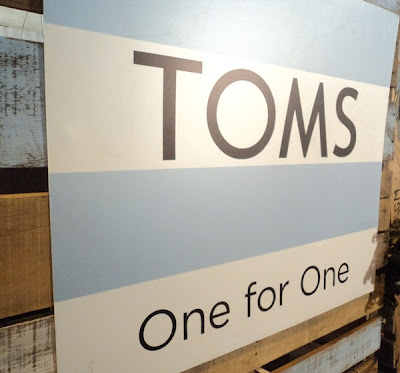 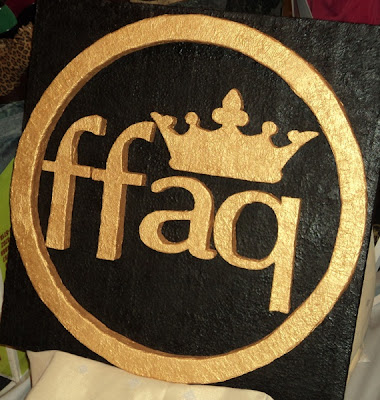 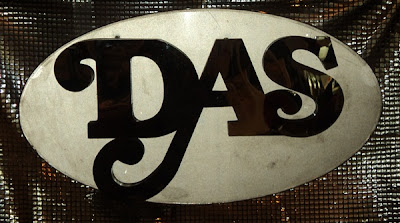 There are a lot more than this, I just didn't got the chance to take photos of the other brands..

And now be amazed about the shoes that you will see.... haha too much?? yea I know I know.. but they really are great.. 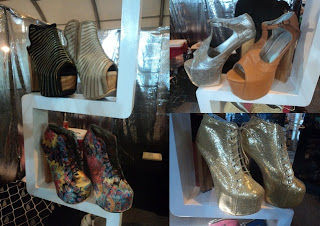 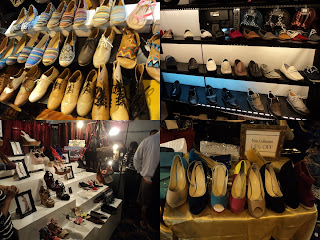 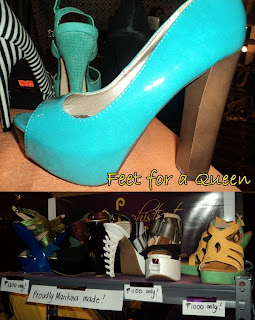 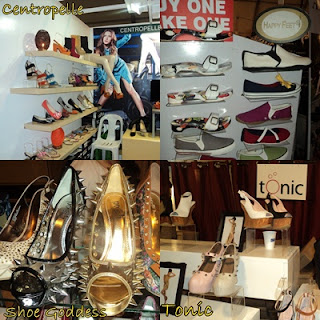 There were also bags, accessories and cosmetics. 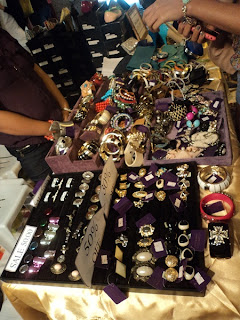 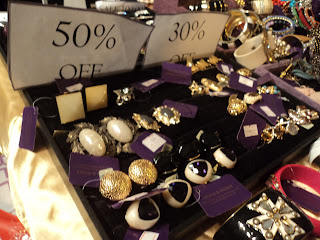 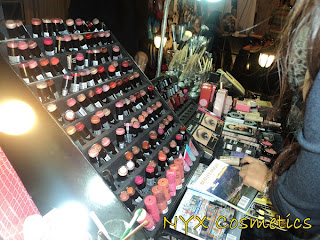 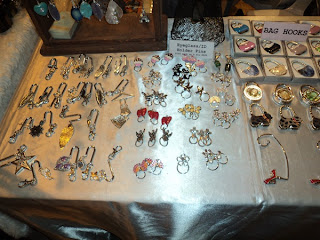 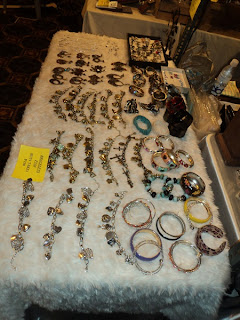 Of course I can't end this post without a photo of me and my twin :) haha 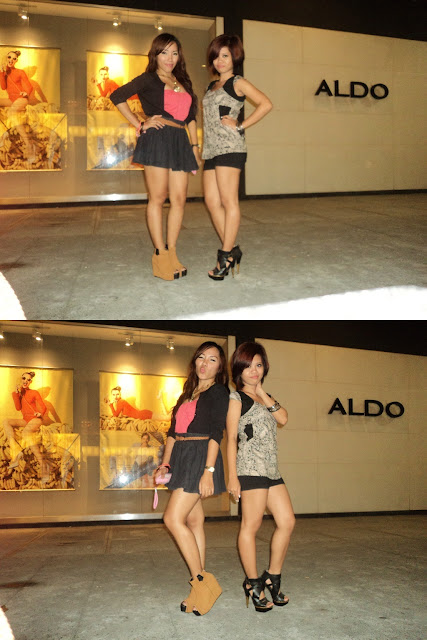 BTW, I will be the one making the OOTN (Outfit of the Night) video and not her, I suck at editing but she still insisted coz I just started making vlogs (video logs).

Thank you for reading this post
Glad to have visitors on my blog.